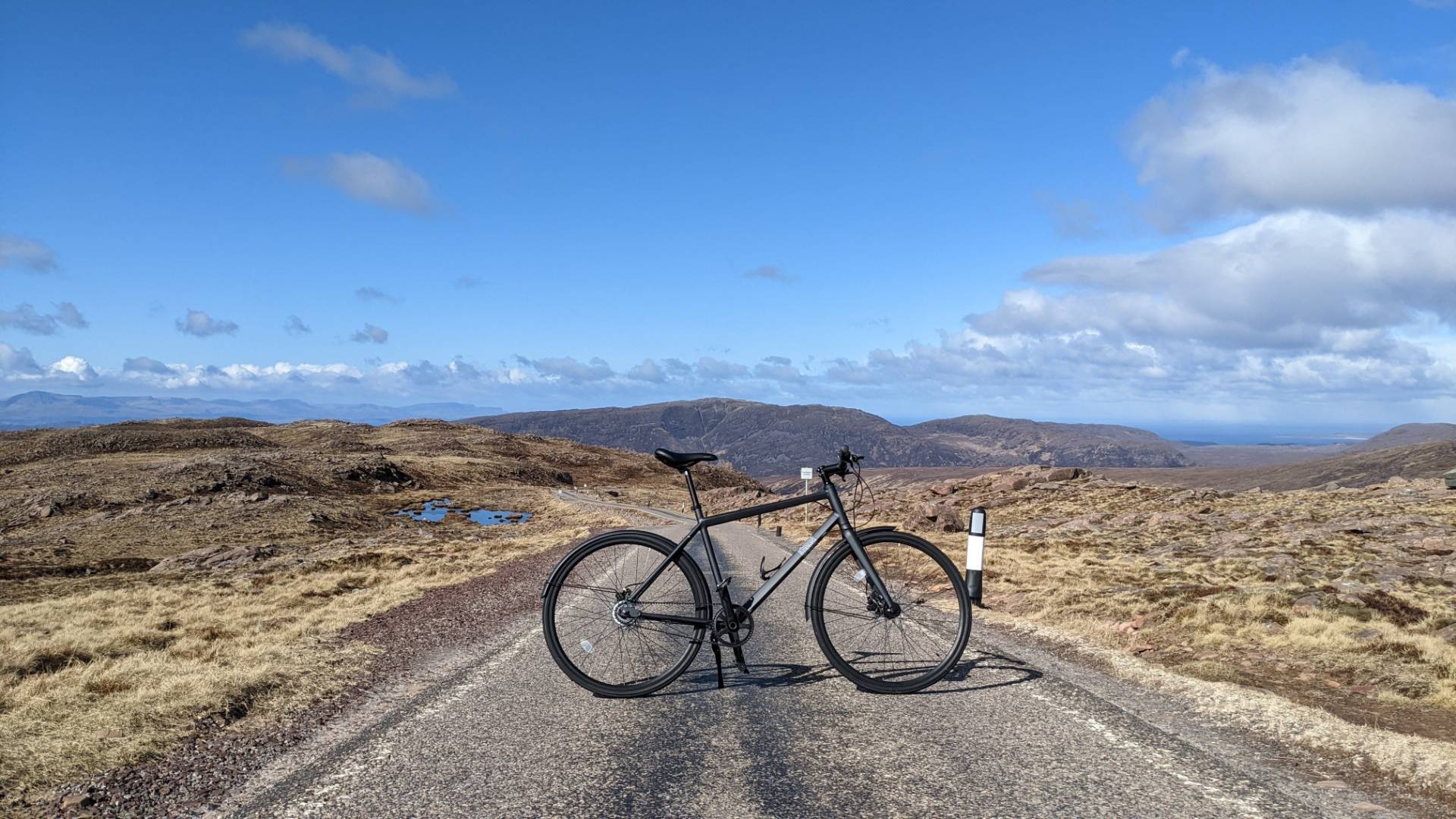 Bealach na Ba is a climb that has long been on my radar. An old cattle drover’s route over the Applecross Peninsula, and now famous as the longest open road climb in the UK, it’s over 1,000km and 12+ hours drive north of London.

I wasn’t going to miss the opportunity then when, on our tour of the Highlands, I found myself staying just across Lochcarron from the ascent. The only question was whether to ride my endurance road bike, or the new Zeppo v.8 I had with me… In the end I decided to take the Zeppo, it would give me a chance to really put the bike through its paces. I already knew that what we’d made would excel in the city, but now I wanted to prove just how versatile it was… and where better than a 626m climb with sustained gradients up to 20%?

Setting off literally from sea level next to the loch, with the mountains towering overhead, gives the climb a special feeling, and for the first couple of kilometres the gradient was a benign 5% or so. The Zeppo and I flew up along the hillside, through the Coire nan Arr valley, and into the Coire na Ba.

By this point, I had been riding for half an hour or so, and the views over the loch (coupled with a bag of Jelly Babies) had kept me going but I knew the gradients were going to kick up big time. I had known the Bealach na Ba by reputation as one of the UK’s biggest climbs for years, but what I hadn’t realised was that it was also one of the most stunning climbs in Europe.

The way the road sweeps up the valley, into the monumental Coire nan Arr gorge, and then up the final ascent of the Bealach itself is quite Alpine in nature. Relying on hairpin bends to climb the final 100m or so of altitude, and bursting out on to the Carn Glas plateau over 600m above sea level.

This last section had me working hard – sustained 20% gradients are tough on any bike in the world, but the way the Zeppo and its Nexus 8 hub gears handled the climb was astonishing. Sure, I was out of the saddle for a good portion, but I never came close to having to walk and the views back down the valley made every painful breath worth it.

At the top, the view to the north, and over to the Cuillin Ridge on Skye were breathtaking and made all the better for the sense of achievement of pulling myself up under my own steam.

There was one more thing I wanted to test though – the handling, braking, and grip on the descent. I had done the hard yards and now I wanted to enjoy the rest.

The first thing that struck me was the stability of the bike at speed. A long wheelbase and stiff frame meant that cornering fast on small roads was no problem at all. The hydraulic disc brakes gave loads of raw power but also plenty of modulation so that I knew I could lose speed in an instant if I needed to.

Getting back down to sea level I stopped by the small stone bridge to admire my steed. The belt needed no oil, the brakes no adjustment, and with rain and snow forecast over the next few days, I knew the mudguards were about to come into their own.